The amendment serves to remove the requirement that the chair of the Panel must manage the Panel’s budget, given that this is practically a function of ICASA and not of the Panel.

[3 May 2019] ICASA has published draft Consumer Advisory Panel Amendment Regulations, inviting comment by 11 June 2019. The amendment relates to the handling of the budget by ICASA rather than by the Chairperson of the Panel.

[1 March 2018] The Consumer Advisory Panel will be (re)launched at the capital Moloko Hotel on 9 March, with registration commencing at 09h00. 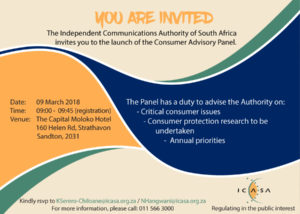 [28 June 2017] ICASA has published a Reasons Document on the Consumer Advisory Panel Regulations which can be viewed at the following link:

[30 March 2017] ICASA has published finalised Consumer Advisory Panel Regulations which came into force on publication in the Government Gazette on 28 March 2017.

Summary: the CAP Regulations seek to establish a Consumer Advisory Panel under section 71 of the Electronic Communications Act and deal with related administrative matters. The purpose of the CAP is to “advise the Authority on matters relating to consumer issues” in South Africa.

The CAP is to be made up of eleven members with insight into consumer issues in the electronic communications, broadcasting and postal services sectors. Members will be nominated and confirmed through a public process. The chairperson of the CAP – to be appointed from selected nominees by ICASA’s Council – will have a 3-year term of office, while members will service for 2 years. In both cases there is a maximum of two terms.

The functions of the CAP include:

The CAP is required to prepare an annual plan and budget for approval by ICASA, as well as submitting quarterly and annual reports to ICASA’s Council on its activities and findings “or as required”. It is required to meet 4 times a year, with any additional meetings to be approved by ICASA’s Council. Meetings may be held through online communications platforms if feasible. Members may be remunerated at rates determined by ICASA’s Council for attendance at meetings (including travel and other disbursements with prior approval from ICASA).

ICASA is required to provide administrative assistance to the CAP and to provide required funding in accordance with the CAP’s annual plan and approved budget and ICASA’s procurement processes.

Interestingly there is a specific provision prohibiting members of the CAP from interacting with the media without ICASA’s prior written approval.

These Regulations repeal the Regulations on the Establishment and Constitution of the Consumer Advisory Panel of ICASA as published in Government Gazette No. 30273 of 10 September 2007.
____

[29 July 2016] An ICASA press release dated 29 July 2016 provides some clarity on the process being followed here:

“The amended Draft Regulations seek to prescribe the manner in which the panel is to be constituted and further sets out the functions of the panel as well as the duties of panel members. Once constituted, the panel shall, among other things, advise ICASA on consumer issues resulting from information and communications technology usage as well as promote the interest of consumers with particular focus on persons with disabilities, senior citizens and persons living in under-serviced areas.”

[26 July 2016] ICASA have now published draft amendment regulations with the objective of providing clarity on the  appointment, constitution and role of the Consumer Advisory Panel.

[1 April 2016] A frequent criticism of regulatory processes undertaken by ICASA is the lack of coherent consumer representation in such processes. The Electronic Communications Act recognises the need for a consumer voice in shaping regulation and to this end makes provision for the establishment of a Consumer Advisory Panel (ICASA-CAP) under ICASA to provide appropriate input.

Previous attempts to establish ICASA-CAP have failed, but it appears that there will be a further effort to get this body up and running, after ICASA published draft regulations relating to how ICASA-CAP will be constituted.