[30 January 2017]  The B-BBEE ICT Sector Council presented on its progress in implementing the ICT Sector Code to the Portfolio Committee for Telecommunications and Postal Services on 24 January 2017. The Council noted that – since it was established in September 2015 – it has:

[14 November 2016] A final, amended version of the Codes of good practice for the Information and Communications Technology Sector under the Broad-based Black Economic Empowerment Act was gazetted and came into force on 7 November 2016.

[26 October 2016] The B-BBEE ICT Sector Council will be officially launched at the Gallagher Convention Centre on 8 November 2016. 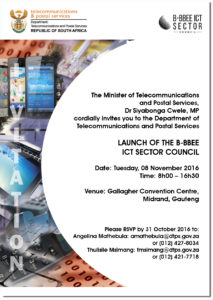 [30 October 2015] The  B-BBEE  ICT  Sector  Council  (established  on  the  23rd  of September  2015) is  mandated  to  implement  and  monitor  B-BBEE  in  the  ICT  Sector and it has undertaken the task of aligning the existing B-BBEE ICT Sector Code with the revised Generic B-BBEE Code of Good Practise. The Department of Trade and Industry (dTi) requires this process to be completed by the end of October 2015 (failing which the sector will revert to using the generic codes).

The Council has prepared a draft aligned  B-BBEE  ICT Sector Code  which is to be published in  the  Government  Gazette  after which there will be a 60 day period for submissions by interested parties.

Note that this is not the gazetted version and therefore the 60 day period has not commenced yet.

The ICT Sector Code will be subjected to a comprehensive review by the end of the current financial year.

Key features include the following:

[24 June 2011] The Department of Trade and Industry has – after a gestation period of some 8 years – published for public comment a draft ICT Sector Code intended to accelerate the transformation of the ICT industry in South Africa.